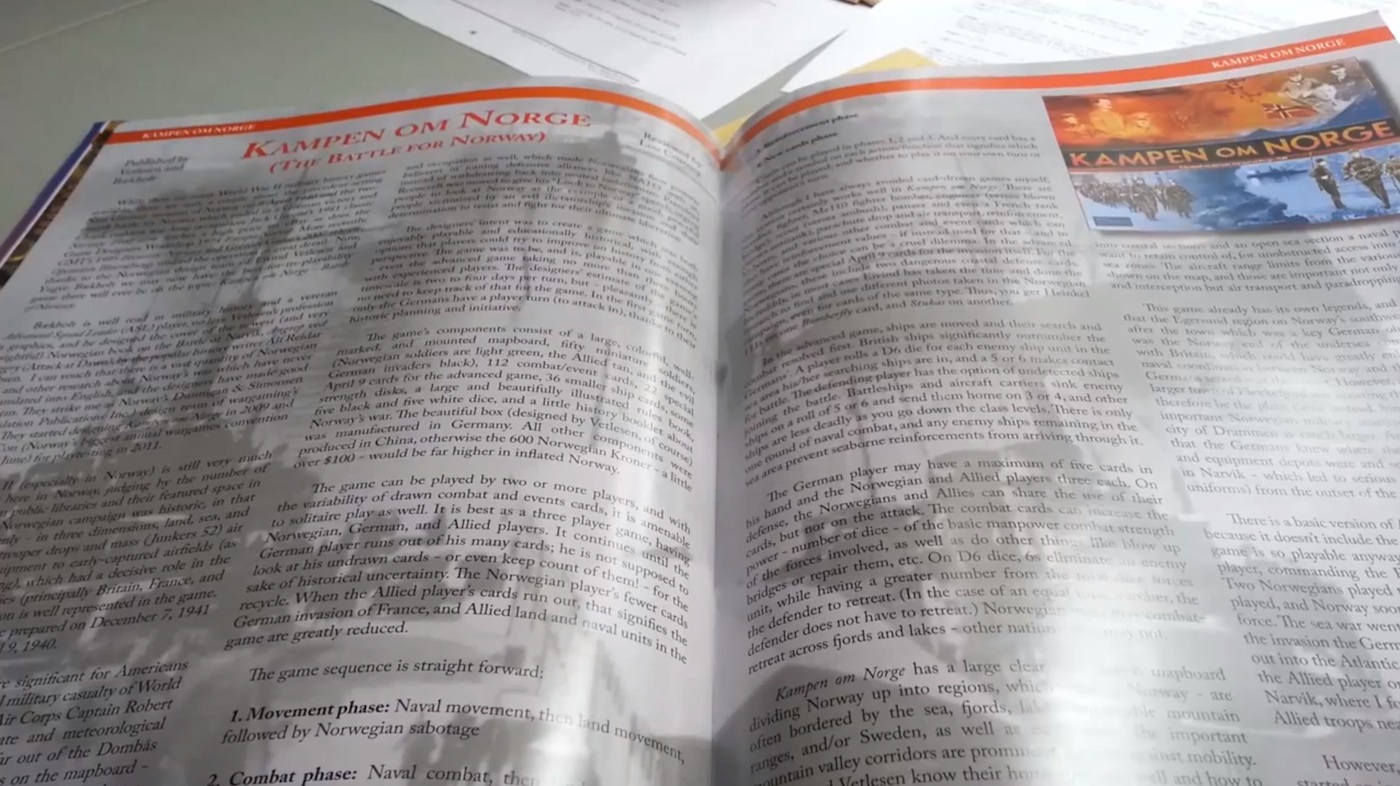 The most recent issue of Paper Wars magazine has a very positive and thorough review of Kampen om Norge by Lou Coatney, over two whole spreads. Editor of the magazine, John D. Burtt, also lists the game as his second favorite game of 2013 in his editorial, which is a real honor.

Kampen om Norge – the real surprise of the year. The Norwegian designers […] have put a really neat game together of the 1940 German attack on Norway using cards and plastic soldiers to make the three sides of the conflict – Norwegians, British/French, and Germans – play separate, but interconnected games. Seemingly simple mechanics, but […] gamers get into the battle quickly.

Bigboardgaming.com gives a video overview of this issue of Paper Wars, and the KoN review, here.

The conclusion of Coatney’s review:

In summary, I give Kampen Om Norge – straight out of the box, even! – my most enthusiastic recommendation to fellow wargamers and look forward to more games from the impressive game design team of Bækholt & Vetlesen.

Capsule Review Rating (1 is the worst, 5 is the best)
Rules: 5 I don’t read Norwegian, but the English translation is available, and they look to be well-organized and as beautifully illustrated and clearly instructive as anything I’ve seen in the hobby.
Graphics: 5 – no question.
Ease of Play: 5, even with the “advanced” game rules, and it is highly interactive and just fun.
Solitaire Play: 5, with all the variability and possibilities of the campaign historically and of this game of it.
Historical Realism: 5 for overall simulation of the campaign. Lower, regarding an unhistorical possibility or two, even if minor.
Game Balance: 4? The game is so variable it is still too early to tell. The Germans may (or may not) have an advantage, but “D-Day”-like game-wrecking solutions have not been found.
Time of Play: 5 A comfortable evening’s game – around 3 hours – with experienced players for the advanced game. The basic game must be much faster, but – except for much younger players – why bother with it?

We are very happy that both Lou and John like our game so much. Following the release of Paper Wars #78 we have had orders for the game from almost all corners of the world (USA, Japan, Hong Kong, France, Italy and Sweden), to our great amusement. Also another great review on Boardgamegeek was posted from a gamer that bought KoN after seeing the Paper Wars review.

This site uses Akismet to reduce spam. Learn how your comment data is processed.